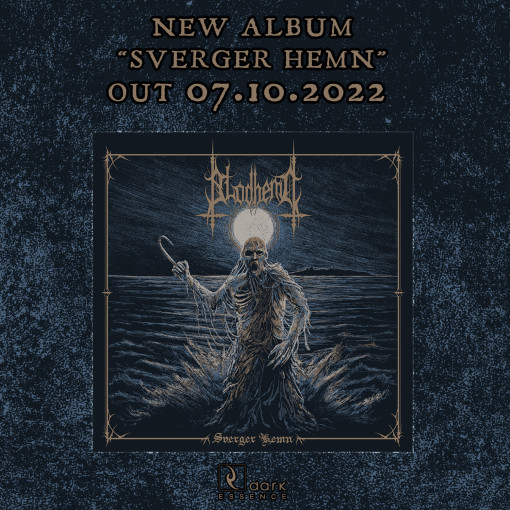 BLODHEMN’s upcoming fourth album «Sverger Hemn», is set for release on October 7th 2022 on DARK ESSENCE RECORDS. About the single, «Fraa Djupet…», Invisus explains «takes you into the distressed scenario of fighting the storms and waves to stay afloat. From the depths the undead reap…».

On «Sverger Hemn» Invisus takes the opportunity to step out of his comfort zone. That’s not to say that he strays far from his trademark icy, aggressive sound, far from it, because he remains true to the heart of his music, whilst, at the same time, using different kinds of vocals and keyboards in order to experiment and explore various elements on a couple of the tracks. The result is an album that is exhilarating mix of Black Metal and Thrash, seasoned with rock’n’roll.

«Sverger Hemn» is an album that took a long time to write and produce, and observant fans of BLODHEMN’s music will notice that musical and visual threads from previous releases progress naturally into the new material. Indeed, much of Invisus’ vision draws inspiration from, and is centred on, the area around Holmengraa on the island of Fedje in Norway, and not unnaturally explores aspects of drowning and being taken by the sea.

«Sverger Hemn» will be available in CD, Digital and Limited Edition Transparent Blue Vinyl formats, and is now available to pre-order and pre-save here: https://link.darkessencerecords.no/Blodhemn_SvergerHemn .